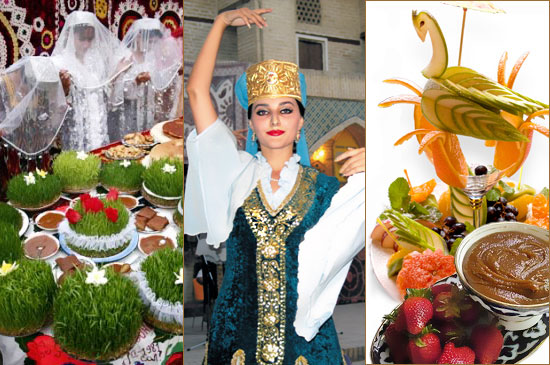 Spring trip NAVRUZ is a unique opportunity to participate in the celebration of this distinctive holiday.

March – is a good time to visit Uzbekistan. Besides, it’s a great opportunity to get acquainted with national customs and traditions of the hospitable Uzbek people during the celebration of Navruz. Today, as well as thousands of years ago, the holiday of Navruz is full of original rituals and colorful ceremonies.

The holiday of Navruz – is the day of the spring equinox. It has been celebrated for more than three thousand years. But the origins of this festival go far in Zoroastrianism. The legend says that on that day Zoroaster was chosen by God to bring the happiness to people.

According to the teachings of Avesta, the holy book of Zoroastrianism, Navruz is associated with the king Jamshid. According to legend, on this day the sun’s rays fell on him. The doctrine of Avesta states that every spring people should celebrate the appearance of life in its six manifestations – water, earth, sky, animals, plants and human beings.

The celebration of Navruz lasts more than 13 days. New Year was celebrated in the field at the end of festivities. Anyone who has gone out to the countryside to enjoy nature will have happiness and prosperity throughout the year. The inhabitants of Central Asia celebrated Navruz in the “Temple of Fire”.

In Uzbekistan the official day of the Navruz celebration is March 21. But in different regions of the republic the holiday is still celebrated a few more days.

– You will see how Navruz is celebrated in various cities of Uzbekistan;

– You will get acquainted with the traditional festivities of Navruz, such as Ulak (Kop Kari), Kurash, rams battle and others.

– You can participate in the preparation of festive dishes – Sumalyak and Halima.

– You will get to know the daily life of an ordinary Uzbek family;

– You will hear the legends associated with the celebration of Navruz.

ULAK or KOP KARI, goat grabbing, is the ancient equestrian game. It is as popular among Uzbeks as among the Spaniards their national passion – the bullfighting “Corrida”. This and other spectacles always attract thousands of people and provoke ebullition of passions.

The objective of the game is to take away from rivals the goat carcass and be first to place it in a goal. Success is achieved thanks to the sharp mind, herculean strength, agility, rider’s ability to stay in the saddle and feel as a unit with the horse.

People who have never seen Ulak, cannot imagine the impetuosity and intensity of the fight that unfolds in the field. Riders sometimes look like an avalanche that runs after one of the players, sometimes surround it, and become a vibrant tangle of snoring horses’ muzzles, flashing hooves, and human figures that move like a tornado and cling to the desired object – goat carcass. The people who see Ulak for the first time are amazed by the intensity of the players’ struggle and the expressiveness of the spectators’ emotions.

Ulak is the most common and popular equestrian sport not only among Uzbeks, but also among the neighboring nations – Kazakh, Kyrgyz, Afghans, Tajiks and Karakalpaks … Each nation calls this game in their own way, but despite some differences its essence is the same. Uzbeks, to refer to the game together with the word “Ulak” also use the name “Kupkari”. Literally it means “the case of many people”.

The program can be modified depending on the time and place of organization of Kupkari and other festivities of the holiday of Navruz!